Thanksgiving weekend was a banner weekend for me – movie-wise.

First, I think I’ve established a new tradition of watching Gone with the Wind on the Wednesday night before Thanksgiving.  It is the perfect movie to watch while I’m baking because it is four hours long and I’ve seen the film a million times.  It is very easy to sit and watch Scarlett and Rhett meet, then get up to make the batter for a coffee cake while the Civil War begins.  When the cake goes in the oven, it is time to sit down and watch Scarlett go through a husband or two.  When Melanie starts birthin’ her baby is the perfect time to get up again to do the dishes. 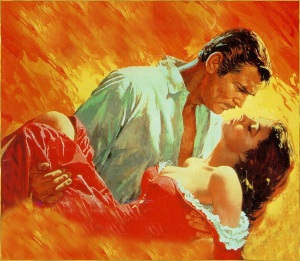 Thanksgiving Day was mostly television-free and rightly so, but I must admit that I snuck in a little Godfather while preparing the big meal.  Hey, most of my family was away at a high school football game while my mother and I were left in charge of the kitchen and most of the Thanksgiving preparations, so don’t judge.  Besides, I think if every family spent a little time with the Corleones during the holidays, they would come to appreciate their own families much more.

Black Friday was the big day for me when it came to movie consumption.  First, though, let me explain.  In my house, Black Friday is also known as National Jammie Day.  364 days out of the year I am a pretty tightly-wound, Type-A multi-tasking control freak.  (Or so I’ve been told by my friends.  Given their honest response, I’m actually a little afraid to ask the opinion of people who aren’t my friends…)  But one day a year I give myself permission to be utterly and decadently lazy.  The day after Thanksgiving I wear my jammies all day, eat leftover pie on paper plates that don’t need washing, watch movies and read books all day.

This particular National Jammie Day, I started with New Year’s Eve by Garry Marshall – a fun, all-star romantic comedy where all the stories are intertwined.  My favorite take on this genre is “He’s Just Not That Into You”, but this was a close second.  Fun and frothy, it was just the perfect start my day.  Since one of the stars was Michelle Pfieffer, I moved on to the movie Stardust.  If you haven’t seen it (and I think a lot of people haven’t) you must!  It is a fantasy similar to The Princess Bride with great actors, clever dialogue and the most stunning scenery from Isle of Skye, Scotland.  It also features Peter O’Toole which of course earns a thumbs up from me.

Wanting to stay in my fantastical mood, I decided to stream the movie Mirror, Mirror from Netflix.  I made it about 30 minutes in before I had to give up.  I rarely give up on a movie, so that’s all we’re going to say about that one…

Saturday afternoon, I exchanged my pajamas for real clothes and went out to face the world (at the movie theater, of course…) where I saw Steven Spielberg’s Lincoln.

The cast was absolutely outstanding – from Daniel Day Lewis to Sally Field and all of the supporting players.  I was amazed how many character actors were in this production, and how easily they transformed themselves into historical figures.  If you are a history buff or a political junkie, this is a great movie for you.

Today, I had to put an end to my movie watching while more pressing matters like laundry, grocery shopping and paying bills reared their ugly heads.  I hate it when that happens.  Hopefully I’ll have more to report on next week.