I just had to devote one post to the series finale of the BBC show Merlin.

Don’t worry, I’m going to be very careful not to share spoilers since the show’s fifth and final season hasn’t aired yet in America.  That said, I did spend a considerable period of time one night scouring the internet for information on the finale which aired on the BBC on Christmas Eve and I will say that I thought the last episode was a fitting end to the series as a whole.

I will give one hint [Whoops, I guess I am giving out SPOILERS after all] by saying that the BBC knows its way around a television series.  It doesn’t take the safe or easy way out. 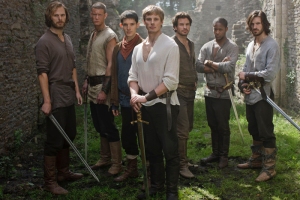 Before I dive into my thoughts about the TV series Merlin, I have to confess that I’ve always been obsessed with Camelot, King Arthur and the Knights of the roundtable, so I was very excited when I first learned of the new BBC series a few years ago.  After the first season was shown in the UK, it aired here as a summer replacement on NBC.  Unfortunately, the ratings were lousy, so they didn’t pick up the other seasons.

Once again, my taste in television shows proves contrary to the rest of the country…

Luckily, the SyFy channel picked up the rest of the seasons, and will air season five this January.  For the impatient among us, there are spoiler blogs and You Tube. (And I don’t feel even a little bit guilty since I fully expect to buy the DVDs as soon as they are available…)

Merlin was interesting because it stayed fairly close to the familiar Arthurian legends while turning a few of the details upside down.  The show did not start with the noble and confident King Arthur assisted by the wizened sorcerer Merlin.  Instead, it was set many years earlier.  We were first introduced to the young and brash Prince Arthur and his servant Merlin – forced to hide his powers due to the fact that magic is outlawed in Camelot.

Guenevere was not yet Queen of the land.  Instead, we met her when she was  servant to the King’s ward, Morgana.  The names are familiar, as are the paths you expect each character to take, but there are enough differences that the viewer was often taken by surprise.

One of the main reasons I enjoyed the series, though, was the humor.  There was action, angst and derring-do, but every episode was tempered by a good measure of laughs – mostly built around the camaraderie of Arthur and Merlin and the engaging actors who played each of the characters.