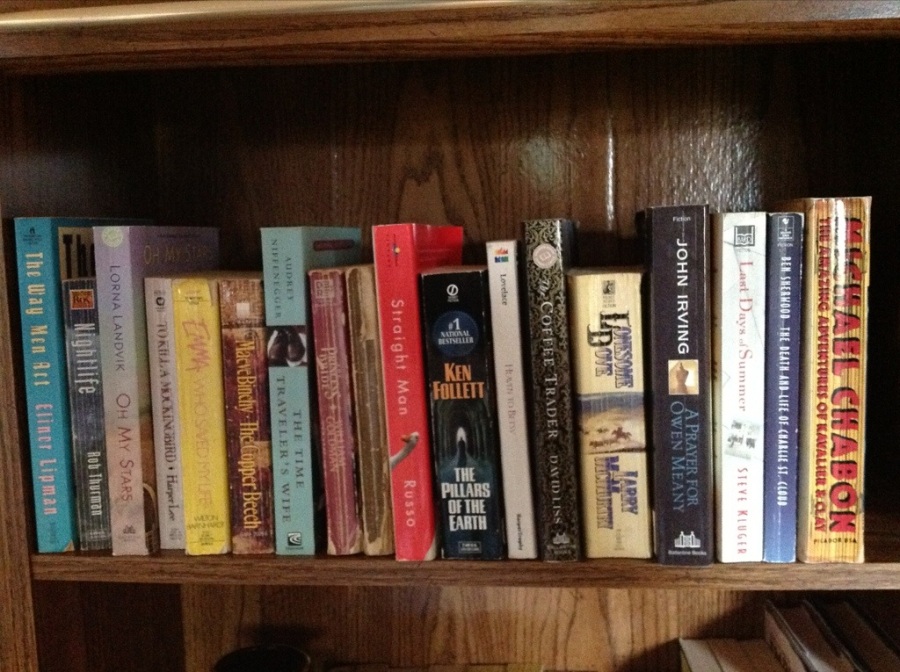 In this week’s issue, several famous authors shared their “ultimate bookshelf.”  I thought this was a fabulous idea and collected all of my favorite books from their various shelves and nightstands around the house to take the photograph above.  I’m sure there are a few of my favorites missing – ones I’ve loaned or lost – but off the top of my head I can’t think of any glaring omissions.  I was very pleased to find most of my most beloved books (some of which you can see are also quite well-worn) were available for show-and-tell.

Some are classics and everyone would agree they deserve a place on any bookshelf.  Other books may have made my list because of the mood or the place I was at in my life when I entered the author’s world.    Perhaps there was a character or a location or a situation that was important to me at that one moment of time.  Who knows – I may have just found myself touched by a book for some inexplicable reason.  Still, I’ll take a stab at explicing… um… I mean explaining my love for the books listed above.

So, that’s my list.  A few Pulitzer Prize winners.  A few children’s books.  Loads that have made the leap from book to movie.
Now it’s your turn.  Did I get it right?  Are some of my favorites yours as well?  Did I list a clunker that you’d like to argue or miss a gem that you’d like to publicize?  I’d love to hear your thoughts in the comments below!

11 thoughts on “My Favorite Books”

Time for a new journal, cause what else you going to do but write? #amwriting #amjournaling #amdreaming PS- bought it in #Austin last year before lockdown and been waiting to put it in rotation.
When you just can’t anymore. #sickofcooking #quarantinecuisine
My version of comfort food. #favoritemovie #goodforthesoul @henrycavill @armiehammer
First time I stepped outside today. #nofilter #prettysunset #socialdistancingisabitchforextroverts
#homeoffice #stpatricksday #mothership,westbrookedition
Alcohol kills germs right?
%d bloggers like this: