Yes, I consider August 22nd to be mid-summer. Please don’t burst my bubble with any of that nasty reality.

So here is how I’ve been spending my summer so far:

I’ve been doing a ton of reading, but very little to speak of when it comes to writing.  I finished writing my second novel in May and am now working toward getting it ready for publication.  To celebrate, I let myself take a little time off this summer and read when I would usually be writing. To quote Stephen King, “If you don’t have time to read, you don’t have the time (or the tools) to write. Simple as that.”

I think that King fella may be going places.

Here’s my completed summer reading list so far (in order from books I enjoyed the most to the least):

If nothing else, this list is a good indication of how much time I usually spend writing.

At the beginning of the summer, I made a bucket list of tasks to accomplish before Labor Day. Let’s see how I’m doing:
1. Eating, Listening to Music and Watching Movies Outside.

I can only check two items off this list.  I’ve eaten outside several times and gone to the Congress Square Park Summer Films (Some Like it Hot is still funny, by the way), but no music.  Luckily it’s only mid-summer so there’s still time left.

Check, check and check! You’ll have to trust me on the fried dough and lobster roll, but here is proof that I enjoyed some Old Orchard Beach Pier Fries. (Which are no longer sold on the pier, but that is another story for another day…) 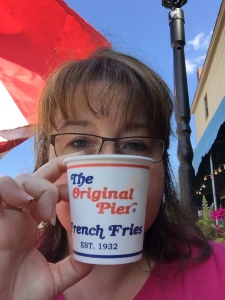 I’ve spent loads of time swimming, both at the pool and beach, but I haven’t gone kayaking yet. I did win $12 dollars at Scarborough Downs, though, (a personal best) and I’ve attended a number of Sea Dogs games.  One of the games included fireworks which were pretty awesome!

Unfortunately, I may have to remove this item from my list this year.  It’s been a crazy busy summer filled with graduations, anniversaries, birthdays and out of town guests – (sometimes I host them and sometimes I am them!)  I did go to the State Theater this week to see Kathy Griffin (hilarious!), so I’m going to make that count as my summer theater visit.

Also, I have been spending plenty of time in movie theaters, watching…

I tend to get obsessed with certain television shows.

Please hold your gasps of shock until the end of the post.

Before Sherlock, there was Supernatural. And before Supernatural…There was Man from U.N.C.L.E.

For the uninitiated, MFU (for short) was a spy show from the 60s starring Robert Vaughn and David McCallum as American Napoleon Solo and Russian Illya Kuryakin. The show itself was the basic campy fare of the day, but at the height of the cold war when school children were still learning to “duck and cover”, the concept of an American-Russian partnership was quite unique and daring.

I don’t know why I love the show so much, but when I heard that Guy Ritchie was filming a movie version I was very nervous.  After all, Harper Lee has already messed with one of my favorite characters this summer.  I was even more nervous when I heard that Tom Cruise was originally hired to play Napoleon Solo.  Thank goodness he bowed out and Henry Cavill was hired as a replacement.  Now I’ll admit I was skeptical, but he and Armie Hammer filled the Vaughn/McCallum shoes quite nicely.

And I say that as a fan of the original actors as well as the characters. Vaughn and McCallum have led incredible lives.  If nothing else, you should read Robert Vaughn’s PhD thesis “Only Victims” which is a fascinating study of the Hollywood blacklisting of the 50s.  (Yes that’s right. The actor that you probably only know from personal injury law commercials has a PhD in political science and was a leader in the 60s anti-war movement among other accomplishments.)

In the meantime, I highly recommend you go see Man from U.N.C.L.E. in the theaters. I’ve seen it twice this week already and plan to see it at least a few more times.  It is fun, witty and as campy as the original, while also being action-packed and beautifully filmed.

Despite my original concerns, seeing the film did nothing to diminish my dream to someday write novels in Nantucket with my two golden retrievers, Napoleon and Illya.

But perhaps I digress…

Enjoy the rest of your summer!