What were you doing Friday night, April 29?  It’s a pretty random question, so don’t worry if you can’t remember.  I, however, remember all too clearly.

I was out with some friends at a charity auction.  I was dressed up, excited for a fun evening with people I cared about and ready to spend some money on a good cause.  Just before the event began, while waiting to meet a friend in the hotel lobby, I received an e-mail from my publisher, Booktrope, announcing that they were going out of business and all of their published books would be removed from their distribution channels (Amazon, etc…) by May 31, 2016.

“Bummer.” doesn’t quite sum up my feelings in that moment.

I could have and wanted very much to freak out. Instead, I put on my best Scarlett O’Hara smile and decided to fiddle-dee-dee and worry about that tomorrow.

“Tomorrow” has pretty much lasted most of the month of May.

The first thing I did – rather than deal with all of those pesky emotions or figure out what to do next – was put on my lawyer hat and figure out what would happen to the rights to my novel.  I’m sure it seems like a no-brainer that my words should be returned to me, but a lot of other people worked hard to make those words into a book. I’m not going to bore you with the details, but there were a lot of legal and financial wrinkles to work out that I am happy to say worked out with very little fuss thanks in great part to:

So, knowing that Next Year I’ll be Perfect was mine to do something with, what was that something going to be?

I had no bleeping idea.

This has not been an easy month. I haven’t blogged about it before now because I’ve been trying to keep the whole thing in a corner of my brain and not deal with it more than I’ve absolutely had to to keep things moving forward.  Today I was faced with the reality of the situation when I hit the link to my book on Amazon and found it was no longer there.  That moment definitely sucked.

(As an aside, when you click on a broken Amazon link, they show you one of the “Dogs of Amazon.” Is it just me, or does Bailey seem sad that my book is gone?) 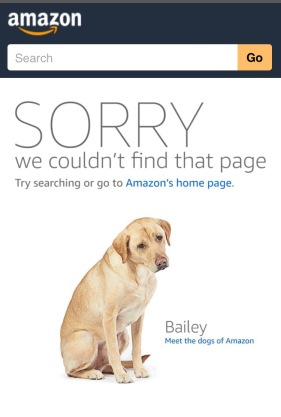 I also have a lot of friends in the Booktrope community who are struggling with the news of its dissolution for a multitude of reasons.    Luckily, there are many others who have put on their own oxygen masks first and reached out to help those around them.  I am very lucky to have found a group of the latter, but understand the sadness and confusion of the former.

At the end of the day, the people who began and ran Booktrope wanted to succeed.  They had an innovative business model and tried very hard to make it work.  They always answered my questions fully and quickly and were transparent about their business model and finances up until they closed their doors a few hours ago.

I thank the team at Booktrope and wish them well.

So, tomorrow is June 1st and I will own all of the rights to my book, my cover designer provided me with a spiffy new cover that removed the Booktrope logo, and I have just enough knowledge about publishing to be dangerous.

Take the novel out of circulation.  It has been a good four-year run.  I’ve sold a lot more copies than I thought I would (over 16,000!), and I can cross “publish a novel” off the bucket list, so maybe I just cash in my chips and go home a winner.

Verdict:  Nah.  I’d worked too hard to just put my novel back in a desk drawer.

Find another Publisher.  Truth be told, this is probably going to be my long game, but finding another publisher isn’t quite that easy.  I finished my second novel, Closer to Fine, a few months ago and already have that one circulating the agent/publisher query wasteland.

Verdict:  Nah. If I find representation for Closer to Fine, I hope they will also want Next Year I’ll be Perfect, but I’d rather lead my query letter with a book that hasn’t been previously published.

Self-Publish. I didn’t self publish Next Year I’ll be Perfect the first time around because I knew nothing about the publishing world and it seemed way too daunting.  Also, I had picked up the idea that self-published novels were somehow “less-than” their published counterparts.

Verdict: Ding, ding, ding. We have a winner!

That’s right.  I’m going to be self-publishing Next Year I’ll be Perfect within the next few days. While I still don’t know much about self-publishing, I know quite a bit more than I did four years ago.  Also, I now happen to know several self-published authors who are not only FAR MORE talented than many who have been published traditionally, they are also very successful.

Of the options available to me, this one feels like the right one.  Stay tuned over the next few days and weeks to hear more about my progress, pitfalls and successes.

Also, I plan to share this space in the future with several f/k/a Booktrope authors.

5 thoughts on “Onward and Upward”